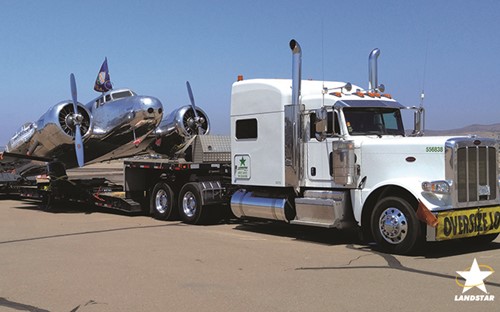 The world’s last original 1935 Lockheed Electra L-10E twin engine airplane, called “Muriel,” made her way across the United States from El Cajon, California to Atchison, Kansas this summer thanks to custom solutions provided by Landstar.

Being the last of her fleet in existence, Muriel is special for many reasons, but mainly because of her connection to American aviation pioneer Amelia Earhart. The Lockheed Electra Model 10-E was named for Earhart’s sister and was the same model plane Earhart vanished in during her 29,000-mile journey around the earth in 1937.

So, when Muriel’s owner, Grace McGuire, decided to sell the plane to the Atchison Amelia Earhart Foundation, the vice president and founding member of the foundation, Reed Berger, knew it needed to be moved with extraordinary care and precision.

“Grace McGuire poured her heart and soul into this plane and completely restored it to its original condition. At the foundation we say we ‘adopted’ Muriel because she really became like a child to Grace,” explains Berger.

At first, the foundation couldn’t find a company that could haul Muriel according to its specifications, that is, until they contacted Landstar and co-agents Dick Davis and Tony Lappe of DG and Co. Inc., who then became part of Muriel’s journey to Earhart’s birthplace in Atchison, Kansas.

“The customer contacted Landstar, after he spent a month trying to find a company that could haul the plane with the care needed,” says Lappe. “Then Landstar contacted us, and DG and Co. Inc. quoted the haul within 48 hours.”

Coincidently, Muriel’s journey started on July 24, 2016, which would have been Earhart’s 119th birthday. Landstar BCOs Richard Gordon and Eric Celestine strapped Muriel’s 60-foot wings, as well as various other parts of the plane, to their flatbeds and they took off.

By mid-August it was time for Muriel’s fuselage and twin engines to make the journey to Atchison. Landstar BCO Abel Mares made this leg of the journey with his removable gooseneck trailer.

“We had to plan with airports along the way in case of bad weather. We needed places that Muriel could be sheltered if severe weather was a threat along the journey,” says Berger.

Mares was accompanied by a front and rear escort, an associate with the Amelia Earhart Foundation and a pilot who would occasionally check the load to make sure the plane was traveling safely and that it wouldn’t be damaged in anyway.

“This is the biggest, most interesting and historic piece I’ve ever hauled,” says Mares. “It’s neat to be able to say ‘I hauled that plane,’ especially with all the history surrounding it.”

Earhart enthusiasts followed the trip online as photos were posted on Facebook via the Landstar Owner-Operators page as well as a special Muriel’s Journey Facebook page and the foundation’s website. Also, members of the Atchison community lined the streets to watch the last leg of the plane’s journey in person. In the end, Muriel “landed” safely at the Amelia Earhart Airport where she will be proudly displayed until plans for the new Amelia Earhart Museum are complete. Once finished, Muriel is planned to be the museum’s centerpiece.

“It is extraordinary to finally have Muriel in her new home in Atchison at the Amelia Earhart Airport,” says Berger. “Landstar did an outstanding job with this haul. From the agents we worked with to the BCOs, everything went smoothly.”