When Landstar BCO Dewayne Walker saw a woman and her two young children stranded in bitter cold temperatures at a truck stop in North Dakota, he didn’t hesitate to offer help. Walker’s actions earned the BCO the Platinum Star of Quality, awarded in exceptional circumstances, intended for those who are faced with a life and death situation.

Without knowing Walker’s name, the motorist emailed Landstar about the independent owner-operator who saved her family on a freezing night in February 2021 when her car wouldn’t start. The female motorist wrote, “It was -37 degrees. I had my two daughters with me – 3 years old and 18 months – and we were more or less freezing. The driver offered for me and my daughters to sit in his truck so we could warm up while he tried to get my car to start. He fed us dinner and let us sleep in his bed to stay warm while he slept in the driver seat.”

Walker, who realized the fuel in the woman’s car had jelled up with the cold temperatures, bought an additive from the truck stop the next morning and poured it into the fuel tank. He made breakfast for the family, then worked on the fuel filter until the car started.

It was a fellow independent business capacity owner who needed Landstar BCO Cliff Thompson’s help after a breakdown during a storm in Texas. Landstar BCO Jeff Forb’s truck wouldn’t start at a receiver site in February when inclement weather and record low temperatures caused power outages in the area.

With Forb in danger of freezing in his truck, Thompson offered his fellow BCO a place in his truck to stay warm for the night. After learning about Thompson’s kindness, a Landstar employee in the night operations department nominated him to receive a Star of Quality Award.

“When it was safe, Cliff even delivered the other BCO’s load. This type of humanity and empathy is something we are so short on in this world. His offer showed true compassion and caring for his fellow man/driver, and for this act of generosity I nominate him for a Star of Quality Award. If I could give him more, I would. I am truly humbled by his kindness.”

Congratulations to all of the Star of Quality Award recipients during January and February 2021. 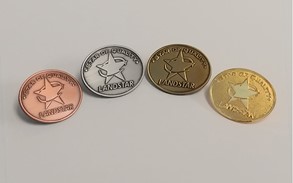 *Landstar’s Platinum Star of Quality Award is only given in exceptional circumstances, intended for Landstar Heroes of the Highway who are faced with a life or death situation.

If you would like to nominate a member of the Landstar network for a Landstar Star of Quality Award, send an email to StarQ@Landstar.com.