Anyone involved in moving heavy or oversize loads knows that some take more effort than others. That was certainly the case with a 94,000-pound scissor-lift platform that stretches 110-feet long and spans 24 feet 6 inches – taking up two lanes of highway. To transport the mobile platform used to repair jet engines, it took three months of planning, coordination with five states, dozens of state troopers, four pilot cars, five permits, one 4-axle removable gooseneck extendable trailer, a 2007 Peterbilt 357, and a Landstar business capacity owner (BCO) with more than 20 years of experience.

The trip from Greenfield, Indiana to Jupiter, Florida, required more than a strategic plan. For months before the over-dimensional load left Indiana, team members of Landstar’s heavy/specialized services department plotted the trip and contracted pilot cars to make practice runs, taking measurements along the way, to be sure they knew exactly what it would take to haul the platform that extends across two lanes of traffic.

The goal was to move Bastain Automation Engineering’s super load to Jupiter, Florida for its customer Pratt & Whitney, a United Technologies company.

“The planning and coordinated effort between all the parties involved is what made this haul happen,” said Global Liaison Connections LLC Executive Director of Operations Sean Raymond. “Landstar BCO Doug Middleton actually brought his equipment to Bastain Automation Engineering in Indiana to show them what he would be using to haul the oversized equipment and that it would be possible to move the freight without incident.”

Landstar, the agency and the customer teamed up to develop and execute a plan that would take the freight through five states. Landstar Supervisor of Heavy Specialized Customer Support James Simpson worked closely with state officials along the path to ensure a smooth, flawless delivery of the giant platform by October 31.

“We had to meticulously measure the platform for planning, and we had to make sure it would fit on the roads we needed to travel,” said Simpson. “The path we originally planned had to change because of construction on the route.”

Throughout the summer, Landstar researched the route the over-sized freight could travel and then made sure the specific guidelines for the haul were met in each state along the superload’s course.

“Each of the five states has different requirements and permits to travel through that state with the oversized freight. We worked closely with authorities to ensure we had the proper permits and route surveys so the superload would be able to travel without disrupting traffic patterns and causing any issues,” explained Simpson.

After dozens of routes were surveyed, a final plan was put into place. The trip from Greenfield, Indiana to Jupiter, Florida would take an average vehicle 1,139 miles to complete or roughly 16 hours and 30 minutes. But it would take Landstar BCO Doug Middleton six days to travel 1,209 miles with the oversized load.

Landstar BCO Doug Middleton started his journey south hauling the mobile scissor-lift platform on October 18, 2016. The trip would take him across five states in a zig-zag pattern down to Jupiter, Florida to deliver by October 31.

“In Indiana, we could only run between 9 a.m. and 3 p.m. In Kentucky, we had to have four private escorts. Then in Tennessee, we could only move at night. 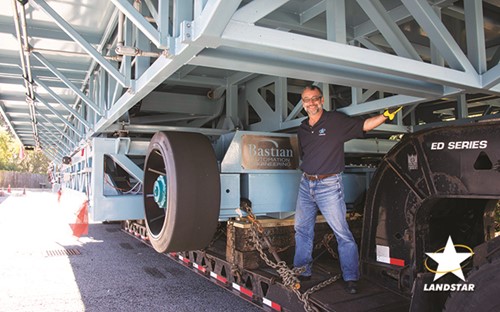 Georgia officials would only let us move on a Sunday and Florida required us to have four highway patrol troopers as well as escorts,” said Landstar BCO Doug Middleton as he explained the basics of what it took for him to drive through each state with the over-dimensional load.

“We took up two lanes in width on the interstates and in some areas, traffic was backed up for miles. When it was safe, we would stop and let traffic go by,” said Middleton. “In the spots where we took up the entire roadway and had to drive between 20 and 25 miles per hour, there were highway patrol troopers far enough ahead to direct people out of our path, so that everyone was safe.”

After six days on the road, traveling at 55 miles per hour or less, Middleton and his escorts made it to Jupiter, Florida for delivery.

When the load arrived at the Pratt & Whitney facility, there was one final obstacle to overcome – train tracks. Middleton couldn’t pull the combined weight of his trailer and the 140,000-pound load over the tracks at the location.

The Landstar team had two alternative places where the platform could be pulled into the facility, and offered to build a ramp that would fit over the tracks and hold the weight of the truck, trailer, and over-dimensional freight.

“Landstar was able to save the customer money. Instead of building a ramp, we found another way to get the freight to Pratt & Whitney,” said Raymond. “Overcoming this obstacle during delivery was another example of the teamwork that took place during this haul – and what made it a successful delivery. We worked 100 percent as a team to make every aspect of this monster haul happen.”