When centuries old cannons needed to be moved, Landstar owner-operators were at the ready. 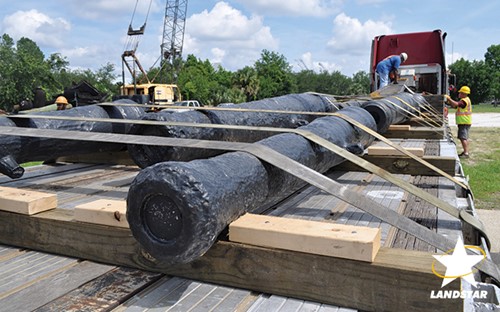 It was an early summer morning in Florida when more than two dozen historic cannons from the Castillo de San Marcos were removed from the national monument in St. Augustine, Florida. Waiting and watching as the pieces of history literally flew through the air by crane was Landstar Business Capacity Owner (BCO) James Parham.

“When I was offered the opportunity to do this, my answer was when and where?” says Parham. “I love history! This is what our country was built on. It was my honor to haul this freight.”

The removal of the centuries old cannons began the first phase of the National Park Service’s multi-year cannon preservation project. During the five-year project, 25 cannons will be transported to Texas A&M University, where the experts in the Conservation Research Laboratory (CRL) will work to preserve the heavy artillery.

“CRL has worked with Landstar before on similar projects,” says CRL Associate Director Chris Dostal. “We needed someone with James’ experience and expertise. He’s ‘run guns’ for us before. James is the best – we also trusted him to find the second BCO needed for the haul.”

“I had run with James before and it was a pleasure,” says Felton. “When he told me what we would be hauling, I was excited. My wife came along for this haul as well, because it was just so interesting.”

The fort’s design presented a challenge. “The way the cannons are situated throughout the fort, we couldn’t access all of them by truck,” says Parham. Only three of the 14 cast-iron cannons could be crane lifted from the fort onto his flatbed trailer. The remaining cannons were loaded on a barge for overnight transport up the St. Johns River to Jacksonville.

The next morning the BCOs, members of the National Park Service and the CRL research team waited on the banks of Jacksonville’s industrial riverfront for the freight’s arrival.

On the second day of the project, in the hot midmorning sun, the barge docked and the cannon unload began. A crew of six men worked directly with Parham, who acted as the project manager throughout the morning, to offload each cannon from the barge.

“There is quite a bit of communication needed between the crane lift operator and the team on the ground,” says Parham. “Having been part of a similar move involving historic cannons in need of specific care, I knew properly loading the cannons on our trailers for transport was important to the customer.”

One-by-one the cannons, lifted from the barge with a hammock-like harness, flew through the air and hovered over the tractor-trailers before they were swiftly harnessed by the ground crew and loaded onto the flatbeds. Once the cannons were cleared from the crane, Felton and Parham went to work precisely strapping down each of the barrels.

“Each of the cannons were secured using several straps. Even though these cannons weighed thousands of pounds, they were fragile and already damaged from years of environmental exposure,” says Parham. “We didn’t use tarps to avoid rubbing the barrels and we made sure the weight of the cannons was evenly dispersed on each truck.”

It took the owner-operators and crew nearly two hours to complete the loading process and prepare for the 965 mile haul from Jacksonville to College Station, Texas.

“When we get to haul items like this, it’s more like a vacation than my profession,” says Felton. “When we pulled into a truck stop, the cannons caught a lot of attention – all eyes were on us.”

“When the BCO team arrived, our team offloaded and staged the cannons in preparation for conservation,” explains Dostal.

“First the crew removed the thick layers of epoxy paint that accumulated on the cannons over the years. To do this, we use chemical peels, electrolytic baths, pressuring washing and some elbow grease.”

It will take several years before the first batch of 14 cannons is complete and ready to be returned to the National Park Service. Meanwhile, Felton and Parham are scheduled to transport the remaining 11 cannons from the Castillo de San Marcos to the Conservation Research Laboratory.

“Being on the road with this freight was an experience, but seeing the end game at the laboratory and how the process to preserve the cannons happens - was the icing on the cake. We can’t wait to go back,” says Parham. “It made the whole experience that much more special. They are bringing history back to life and it’s incredible.”