How to Manage the Massive Moves

Tarsco Inc., engineers and manufactures custom-built, sometimes giant, above ground welded storage tank systems for companies worldwide. The massive tanks, built to hold a wide variety of liquids and crops, are a true testament to the saying “everything is bigger in Texas.”

While the Houston-based company is committed to constructing the safest, most cost-effective tanks for its customers, what the tank engineering company doesn’t do is specialize in transporting the materials to build its impressive structures.

Responding to a critical need for a new source of petroleum in the Dominican Republic, Tarsco was hired to build a liquid petroleum gas plant on the island. When its customer was ready to build, Tarsco needed a safe and reliable carrier to provide a transportation solution the size of Texas. A solution that would transport every material needed to construct Tarsco’s massive tanks, from the United States to the Dominican Republic.

“Initially this project only involved truck transportation,” says Rod Crawley, Landstar vice president of international and expedited sales. “That was, until they discovered how much Landstar has to offer when it comes to project management.”

Independent Landstar Agent Bob Moudy, who runs Driven Force Inc. (MAB) based in Mobile, Alabama, called on Landstar Agent George Donaldson at Navigator Shipping (NAV) in Jupiter, Florida to join him in a meeting with Tarsco to present Landstar’s full capabilities for the project.

“We showed Tarsco that Landstar could manage every piece of the project from start to finish,” explains Donaldson. “They wouldn’t have to turn to any other company. They would have a turn-key solution provided jointly by our agencies with Landstar’s support.”

Both Moudy and Donaldson knew collaboration would be key in providing the most complete service to their new customer. So, they called on Fernando Jimenez, part of a third Landstar agency with established cargo logistics connections on the island.

“We also called executives at Landstar and other agents, knowing this would be a lengthy project and that we would need nearly every aspect of the Landstar system,” says Moudy. 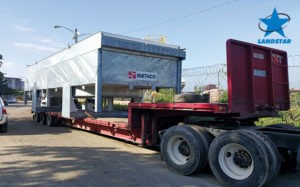 With access to dozens of Landstar business capacity owners (BCOs), three major ports in the U.S., the port of San Pedro De Macoris in the Dominican Republic, chartered ships and complete customs clearance, the agents used Landstar’s support to strengthen the supply chain for this massive project.

“Everything for Tarsco’s construction project had to move to the Dominican Republic,” recalls Fernando, of RCF International (MIA) agency.

“We moved lift equipment, cranes, forklifts, piping and various tools. Every nut, every bolt, every pipe – we transported it.”

All of the materials needed to build the natural gas plant moved via truck, ocean container or plane to the Dominican Republic.

“We did nearly 900 ground loads on this project and had trucks on the ground in the Dominican Republic too,” says Moudy. “90-percent of the freight was over-dimensional or heavy-haul. At the height of this project, it was a 24/7 operation.”

When the ships arrived at the Port of San Pedro De Macoris, the cargo was off-loaded immediately.

“We unloaded the vessels right there at the Port of San Pedro De Macoris, then moved to the job site,” explains Jimenez. “That was an important value-added service for the customer. We were able to load the trucks at the port immediately and move to the site to do the customs clearance.”

“Combining our industry experience, with access to the variety of modes needed to complete this transport just made sense. It created one point of contact for the customer and made the process seamless,” said Donaldson.

After two-and-a-half years and a total of 194 shipments to the Dominican Republic by land, air and sea, the offshore total logistics project was complete. Tarsco tanks were delivered, the liquid natural gas plant was built and it became operational in June 2017. The tanks constructed now supply the natural gas needed for cooking and fueling vehicles on the island.

“Looking at the photos of the finished plant, everything there Landstar moved – everything except the poles and power lines,” said Crawley. “Landstar conducted a logistics operation that is unmatched in this industry. The project was a huge success for everyone involved from the Landstar agencies, to the customer and ultimately, to our customer’s customer.”