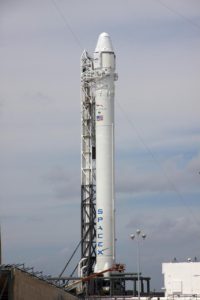 History was made the day SpaceX successfully launched Falcon 9, a rocket designed for the safe, reliable transport of satellites and spaceships into orbit. As the first-ever rocket capable of reflight, the Falcon 9’s successful launch opened a new avenue for companies at the forefront of space innovation with a new way to launch their products into space.

After years of research and development, ORBCOMM, a leading global provider of Machine-to-Machine (M2M) and Internet of Things (IoT) communication solutions, was ready to launch its state-of-the-art second generation (OG2) satellite series into orbit. The ORBCOMM system is the world’s first and only commercial satellite network dedicated to M2M communications.

Before the OG2 satellites could be safely launched into space aboard the Falcon 9, the satellites needed safe and reliable transportation to get from the satellite integration and test facility in Louisville, Colorado to the launch pad in Cape Canaveral, Florida. ORBCOMM turned to Landstar Agent Lori Brackus to transport the innovative satellites because her agency specializes in high tech, highly secure logistical moves.

“These are telecommunication satellites. The public could not know the freight was moving down the road,” says Brackus who runs CJXL Transport based in Conifer, Colorado. “The highly secure nature of these hauls meant we had to keep them classified until long after they were delivered.”

Coordinating the transport of high-security freight is something Brackus’ independent Landstar agency does on a daily basis. Brackus says she first turned to Landstar’s government services team for assistance with providing an accurate quote to the customer and setting up the additional insurance needed to cover the loads. Then Brackus began searching through Landstar’s network of experienced independent owner-operators for ones with the right equipment and clearance for the hauls.

“With specialized, high-value freight like these satellites, the owner-operators needed to have specific clearance and a temperature-controlled unit,” says Brackus. “I looked for owner-operator teams whose trucks are equipped with video monitoring. Those camera systems allow the customer to have eyes on their freight as it travels to delivery.”

Brackus says, in order to move the freight, the driving teams also had to be Arms, Ammunition & Explosives (AA&E) qualified and have specific military clearance.

From the Road to the Stars

“The two teams of BCOs on this load each ended up doing a few loop runs with these satellites. In total, we moved 18 OG2 satellites from Louisville, Colorado to Cape Canaveral, Florida,” says Brackus.

Landstar owner-operator teams Craig and Lisa Ringelstetter and Jim and Linda Quisenberry made the round trip deliveries to Cape Canaveral over the course of six months.

“When we arrived at Cape Canaveral, we were allowed to enter the SpaceX hangar and see the satellites before they were loaded on to Falcon 9,” says Lisa Ringelstetter. “It’s an honor to be part of these things, especially something as extraordinary as this.”

Soon after the final delivery, the satellites were loaded on Falcon 9, the rocket blasted off, and the OG2 satellites capable of providing communication to and from fixed and mobile assets in the most remote areas of the world were put into orbit.

“We obviously couldn’t take any photos, but when we saw the video of the launch, it was awesome to see the freight that was once on our truck sent into orbit,” says Ringelstetter.