How do LCL consolidations work?

As U.S. e-commerce sales continue to grow, shippers are focused on importing more frequent shipments. At the same time, many of those e-commerce shippers don’t have enough cargo to fill an ocean container and face high airfreight costs that often are prohibitive. Thus, there is an increased demand for less-than-container load (LCL) ocean services. Instead of paying for a full container load (FCL), LCL keeps the global supply chain moving as a timely, economical alternative for smaller ocean shipments.

Much like over-the-road services, where Landstar agents can offer both truckload and less-than-truckload options, Landstar provides LCL services to give a single shipper the opportunity to lease a portion of the space in an ocean freight container.

The Value of Smaller Volumes

At E-Global Freight LLC, Landstar Agent Carsten Dahl began offering his customers weekly LCL freight services when he opened his independent Landstar agency in 2014. Dahl’s years of experience in global logistics coupled with his agency’s Miami, Florida, location allowed him to quickly find his niche as an LCL importer.

“My goal with offering this service is to reduce costs for my customers,” says Dahl. “Landstar’s LCL services cut out the middleman for the customer. That means no extra fees, only one bill of lading and no outside shipping agents involved in the process.”

Eager to offer customers more shipping options and full access to his leased 40-foot ocean freight container space, Dahl reached out to Landstar’s network of independent agents with the opportunity to collaborate on LCL service offerings.

“The opportunity to consolidate shipments with Dahl’s container means a more economical, direct transit for my customers in China,” says Terkildsen. “From the Port of Shanghai directly to Miami, Florida, is only 34 days travel time.” Terkildsen adds that consolidating LCL shipments is ideal for his customers that want to avoid long periods of downtime when they don’t have enough freight to fill a full container. 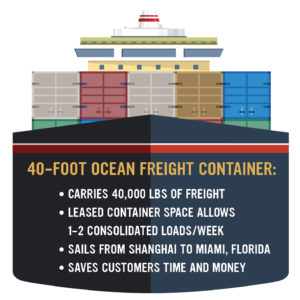 Imports arriving in Dahl’s leased ocean containers have no delays at the port. Once the container arrives in Miami, it is transported directly to the agency’s Miami warehouse location, where all customs clearance operations are completed by Landstar.

“We’ve cut out the warehouse fees associated with international ocean freight. A lot of the headaches can happen during customs clearance or when freight is delayed at the port. Our warehouse operations and Landstar’s support removes those annoyances from the process,” explains Dahl.

Landstar Global Logistics is licensed as a Federal Maritime Commission (FMC) Ocean Transportation Intermediary, as both an Ocean Freight Forwarder and a Non-Vessel Operating Common Carrier (NVOCC), and is also a licensed U.S. Customs broker able to oversee the customs and entry clearance operations for Landstar’s international shipments.

“The support from Landstar gives the customers peace of mind while their freight is cleared,” says Dahl. “Because Landstar Global Logistics owns the bill of lading, we have become what are called ‘master loaders,’ or the consolidator on the LCL loads. That’s not something every logistics company is able to do for its customers.”

With the support of Landstar’s network, Dahl encourages other agents to take advantage of the weekly LCL services he offers customers and says LCL doesn’t just save customers money, it gives them security in knowing their goods, traveling thousands of miles by sea, will get where they need to be, intact and on time.

“There are a lot of goods coming here from the international ports just in our 40-foot container alone,” says Dahl. “And, the fact that those goods are then loaded onto a Landstar business capacity owner’s truck and travels to destinations throughout the United States – Landstar is making the world go round with this service. Literally.”