The F-117 Nighthawk is said to be “the epitome of innovation and collaboration between the United States Air Force and industry.” Developed in the late 1970s by Lockheed Martin Skunk Works® division, F-117s were created quickly and in complete secrecy in response to the national need for a jet fighter that would operate undetected by the enemy.

Officially in service from 1982-2008, the Nighthawk design was retired with one final flyover at New Mexico’s Holloman Air Force Base before the remaining planes were stored in an undisclosed location near the Tonopah Test Range in Nevada, according to Lockheed Martin.

The public noticed in 2019 when an F-117 Nighthawk was transported from its Tonopah Test Range location. Eleven years after its retirement, the sighting of the famous stealth jet covered in tarps made headlines.

What photographers and aviation experts didn’t know when they published the photos was why the Nighthawk was on the move or where it was going.

“We had one month to arrange the transport of the Nighthawk from the Lockheed Martin Skunk Works® division to two locations,” explains Mike Thompson, agency owner of D&M Transportation Inc. “The first part of the move was getting the jet to the Skunk Works facility in Palmdale, California. The second would be a few months later to its final destination. Throughout the entire planning process, the freight – which was the fuselage of the aircraft – had to be kept a secret.”

It would be months until the Nighthawk’s secret mission would be revealed to the public. In early November, prior to the aircraft’s transport to the Reagan Library, the library and Lockheed Martin announced the project to the public, and confirmed that F-117A Nighthawk, tail No. 803, would go on permanent display at the Ronald Reagan Library in Simi Valley, California.

“When planning for Operation Nighthawk Landing began in the spring of 2019, we immediately turned to Landstar to plan the logistics necessary to move the aircraft from its location in Nevada to the Lockheed Martin Skunk Works facility in Palmdale and ultimately to its final destination in Simi Valley,” says Lockheed Martin Aeronautics’ Kristian Melgar, lead manufacturing engineer for the project. “The main requirements to move the Nighthawk were an owner-operator who had the right government clearance, equipment and plenty of driving experience.”

When independent Landstar Agent Mike Thompson began his search for a Landstar business capacity owner (BCO) with the right requirements for his customer, he found team drivers Brian and Lisa Clevenger. With more than 50 years combined driving experience, a stretch double drop trailer, plenty of large tarps and the specific military clearance needed, the Landstar BCOs didn’t hesitate to book the load.

“It was an honor and we both were glad we had the chance to do it,” says Brian Clevenger. “We have a lot of experience with big projects and military loads. We’ve traveled with loads more than 19 feet wide before, but nothing as memorable as a Nighthawk. This is the kind of load you don’t forget.”

The Journey to Simi Valley 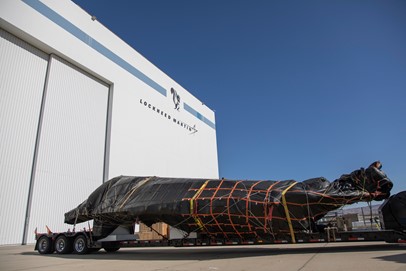 Before the journey could begin to Simi Valley, the Clevengers had to completely conceal the massive, unmistakable shape of the Nighthawk’s fuselage. With the load traveling at 100 feet long and nearly 20 feet wide, the BCO team spent five hours meticulously covering the freight.

“There’s nothing like trying to hide a plane,” laughs Clevenger. “We ended up using 3,888 square feet of tarp to cover the entire aircraft. It had to be a snug fit – the securement was perfect and it transported without any issues to Palmdale. The customer was very impressed with our efforts.”

Arriving safely in Palmdale, the Nighthawk was immediately unloaded via crane and readied for restoration. For the next few months, the Skunk Works team worked to restore the aircraft for the Ronald Reagan Library’s new display, while the Landstar team diligently planned the Nighthawk’s final transport – securing state permits, escorts and performing route surveys.

“The route surveys gave us a better idea of the path the 20-foot wide load could take through California and whether or not the BCOs could make all the necessary turns along the route,” says Thompson. “The biggest concern was at the library itself. There is a series of very narrow, hairpin turns going down the hill that Brian Clevenger would have to make at delivery. In order to ensure those turns would happen and we could deliver the plane, we put some additional plans in place to help the BCO navigate the turns.”

As Thompson explains, the plan included a crane on standby to assist with the turns if necessary. “Essentially the crane would be there if needed to pick up the back of the trailer, helping the trailer make the turn with the wide load.”

A short 61 miles from the Skunk Works facility, the Clevengers arrived in Simi Valley ready to navigate the hairpin, downhill turns associated with delivery. Lisa got out of the truck to help Brian navigate via two-way radio while he drove. Slowly but surely, and according to witnesses, flawlessly, Brian made each hairpin turn without use of the crane.

“The biggest obstacle in transporting aircraft No. 803 was the ability to navigate around the multiple hairpin turns that lead to the installation location,” says Melgar. “Landstar’s dynamic plan mitigated risk and promoted safety while navigating these tight turns.”

After the successful delivery, the F-117A Nighthawk, tail No. 803, took to the skies one final time as it was lifted by crane from the Clevengers’ trailer and fixed into its permanent new home. 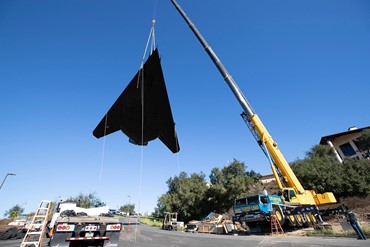 “It was incredible to be part of this very special opportunity,” says Brian Clevenger. “We are both very proud of this move and especially helping to put this piece of history on public display.”

“The project was a success because of the outstanding precision, planning and navigation from both Landstar BCOs, along with the collaboration of Lockheed Martin’s transportation team,” says Melgar. “Landstar’s integrated teamwork, and excellent communication with Lockheed Martin ensured the successful delivery and installation of the Nighthawk’s permanent display at the Ronald Reagan Presidential Library.”

On Dec. 6, 2019, officials held a ribbon-cutting ceremony to unveil the new display featuring the F-117A Nighthawk, tail No. 803. The plane entered service in 1984 during Reagan’s presidency and flew 78 combat sorties - more than any other F-117.