What Is In The Landstar Van? Pieces of History 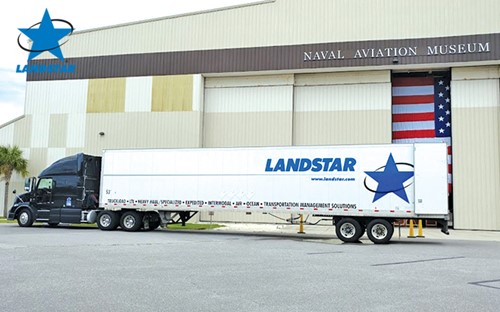 Some priceless wartime artifacts were secured inside this Landstar dry van – irreplaceable items used by the many men and women who, as they served our country, were captured and held for years in captivity.

The traveling exhibit “Victory from Within: The American Prisoner of War Experience” is a collection of items, including a mess kit which a prisoner engraved to honor the lives lost during World War II, and a drinking cup and spoon from an Air Force colonel who spent 1,943 days in captivity in Vietnam.

The exhibit was first put on display by the National Park Service in 2013. Designed to give the public a rare look into what life was like for prisoners of war (POWs), the exhibit travels to museums across the United States thanks to the logistical support of Landstar.

Independent Landstar Agent Brian Moore’s Pensacola-based agency, Big Load Freight, earned the honor to transport the artifacts to its recent location in Pensacola. With six years of experience in coordinating high-value moves, Moore immediately began preparing to move the display items in May 2017 from Columbus, Georgia, to Pensacola, Florida, by the exhibit’s opening June 1.

“There were specific loading and unloading guidelines from the customer because of the priceless, high-value items associated with the freight,” says Moore, who included Landstar BCO Remone Durr in the plan.

“I am always prepared with every load, but with this freight, it is even more important. I am hauling irreplaceable pieces of history,” says Durr.

Moore spent one week planning and coordinating the details for the 245-mile trip. Based on the transport guidelines from the National Park Service, the exhibit items from the National Civil War Naval Museum in Columbus, Georgia, were loaded and secured in the Landstar trailer.

“This was a special trip, and a unique one,” said Durr. “It’s not every day that I have the honor of hauling historic items like this.”

When Durr arrived in Pensacola with the delivery, he was surprised to see a crew ready to unload the van – a group of military volunteers at the museum who were as honored to unload the freight as Durr was to haul it.

The team unloaded the trailer using the customer specified pallet jack and forklift just days before the traveling exhibit opened at the National Naval Aviation Museum on June 1, 2017. Moore was among the first visitors to see the display after the exhibit opened.

“It was an honor to see it in person,” says Moore. “Knowing the items on display arrived safely and completely damage free because of Landstar, my agency and the outstanding service provided by a Landstar BCO.”

According to the American Trucking Association, of the 10 billion tons of cargo shipped each year in the U.S., the majority of it rides in a van. What’s so special about the freight inside a Landstar van? Every time, it’s connected to an independent Landstar agent and business capacity owner, both with a vested interest in going above and beyond to deliver the cargo safely and on-time – whatever the load may be.  For more information on Landstar’s services, click here to request a quote.