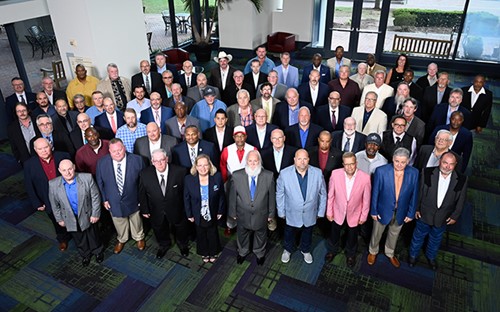 The select group of honorees were celebrated during a three-day event held in Savannah, Georgia. The annual event recognizes outstanding safety records and professionalism behind the wheel. The Class of 2018 is one of the largest classes of Million Mile Safe Drivers inducted in Landstar history. Each of the inductees has driven more than one million consecutive miles without a preventable accident.

“Landstar is proud to showcase one of its largest classes of Landstar Million Mile Safe Drivers and Roadstar honorees as the industry’s best,” said Landstar President and CEO Jim Gattoni. “Their skill and dedication is worthy of a celebration.”

Of the 1,043 active Landstar Million Mile Safe Drivers, 14 individuals were awarded with the Roadstar distinction during the 2019 celebration. The Roadstar honor is one of Landstar’s highest awards for owner-operators who are chosen for their high levels of safety, productivity and excellence in customer service. Each of the 14 Roadstar inductees previously earned the Million Mile Safe Driver status. The new Roadstar class raises the total number of active Landstar Roadstar recipients to 176.

“Landstar Roadstar recipients raise the bar for the entire trucking industry,” said Gattoni. “Their dedication to service and excellence has earned them the right to be called the most elite independent business capacity owners at Landstar.”

The Class of 2018 Roadstar® recipients