Landstar million mile safe driver David Zelsdorf says something magical happened at the 2018 BCO All-Star Celebration in Savannah, Georgia. As he explains it, when the finalists for the Landstar All-Star Truck Giveaway were announced, his wife Patty leaned over to say something as Gregg Nelson, Landstar vice president of BCO retention, was calling out the finalists’ names.

“Gregg said, ‘And the next finalist is…’ and at that moment he paused. I looked over at my wife and she leaned into me and whispered, ‘David Zelsdorf,’ then seconds later, Gregg called my name,” says Zelsdorf.

At first Zelsdorf was in disbelief. Then, the disbelief turned into an overwhelming feeling that he would be the next Million Mile Safe Driver to win a brand-new rig.

“Just nights before the event, I had a dream about winning the truck. Then it just seemed like my dream was coming true. That’s when I turned to the other people at my table and told them I was going to win a brand-new truck,” says Zelsdorf.

Since leasing on with Landstar in 1997, Zelsdorf says he’s always purchased previously owned trucks. “A new truck just wasn’t in our budget. I’ve had reliable equipment, but never new.”

While his three previously owned trucks were not new, they all had one thing in common with the 2019 Western Star 5700XE he won – they were all blue. According to Zelsdorf, it was another sign that he was meant to be the owner-operator of the blue haze color giveaway truck. 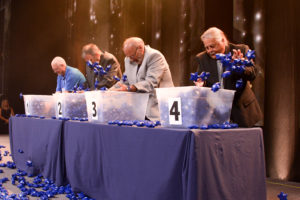 On the final night of the All-Star Celebration, the truck giveaway finalists took the stage. Each finalist selected a bin they hoped held the truck keys inside. By default, Zelsdorf picked last and took his place behind the remaining bin.

“Getting to choose last didn’t bother me,” says Zelsdorf. “I still knew I was going to win that truck.”

The finalists were instructed to dig into the four bins filled with blue squishy stars to search for the truck keys hidden somewhere in one of them. As the finalists tore through the bins, the stars went flying through the air, spilling onto the floor and out into the audience. One of those stars, with keys attached, flew right out of Zelsdorf’s bin onto the floor.

“I dumped my bin out – and there were no keys,” says Zelsdorf. “Then I looked down the line and the other guys didn’t have keys either. That’s when I looked back at my bin of stars and the pile down on the floor. Then I saw them, the keys were on the floor!”

Scooping up the keys, Zelsdorf held them high above his head to show the crowd. That’s when he says he had one last revelation about winning the giveaway truck.

“I had won, my dream came true,” Zelsdorf’s eyes welled with tears. “Then I started thinking about how this new truck will help my family and my business. With a new truck, the opportunities are endless.”