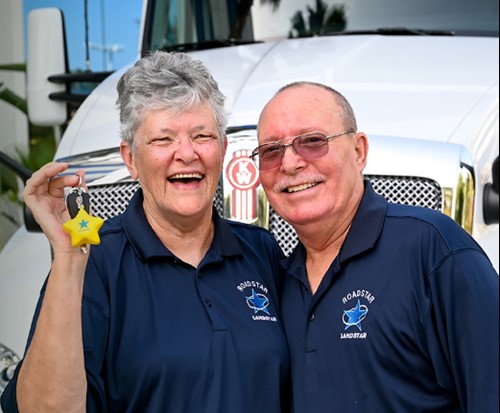 Landstar Roadstar® Cecilia “Cece” Logan was on the road the night she learned she was the winner of the Landstar All-Star Truck Giveaway.

“When I got the call, I actually thought it was just Landstar saying I didn’t win,” says Logan, who had been notified the night before that she was a semi-finalist in the truck giveaway. “The last thing in the world I thought I would hear was I had won the truck. So when Gregg told me, I felt like I couldn’t speak, I couldn’t believe it was true.”

After the phone call, Logan says slowly, but surely, the realization set in that she and her husband and team driver, Jaimie, were the new owners of the giveaway truck. The crisp-white 2020 Kenworth T680, would mean more opportunity for the million mile safe drivers, who started running their business together in 2001.

Cece Logan was first introduced to Landstar 27 years ago, when she met Jaimie, who leased to Landstar in 1992. She was working as the night shift manager at a truck stop in California. He was one of her regular customers. After more than a few visits to the truck stop, Cece says she realized that Jaimie was more than a customer.

“We fell in love through those visits at the truck stop. We got married in 1994, moved to Alabama, raised our children, and in 2001 I joined him in the truck,” says Cece.  “Landstar lead our journey as a couple in the beginning. Now, with the new truck, Landstar is leading the next chapter of our journey as owner-operators.”

The new truck, according to the Logans, guarantees them even more time on the road together and is another opportunity from Landstar that will help support their independent business.

“This is such a wonderful gift from Landstar. The truck will allow us to nurture our business for many more years and keep us running together for a long time,” says Cece.

About the Truck Giveaway

Landstar Roadstar Cece Logan was one of eight semi-finalists and one of four finalists selected randomly in the Landstar All-Star Truck Giveaway. Each year, the truck giveaway is the grand finale of the Annual Landstar BCO All-Star Celebration. The All-Star giveaway truck is exclusively reserved for a Landstar Million Mile Safe Driver or Landstar Roadstar® honoree. Eligible Landstar business capacity owners (BCOs) do not have to be in attendance at the BCO All-Star Celebration to win the giveaway truck.

During the 2019 BCO All-Star Celebration Landstar Transportation Logistics Director of Compliance Operator/Equipment Pennie Merie stood in for Logan on stage to dig through a bucket of “stars” to find the giveaway truck keys. The 2019 All-Star Truck Giveaway powered by Comdata marked the 40th truck given away in Landstar’s 30-year history as a company.