“We live in a beautiful country, and trucking is a great way to see it.” Those words might sound like a recruiting pitch to some, and in a way, they are. They’re the heartfelt advice of Debra LaBree, a professional driver and business owner, and Women in Trucking’s (WIT’s) July member of the month. 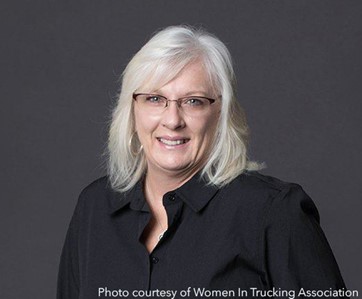 LaBree and husband Del own Castle Transport LLC, based in the Joplin, Missouri, area, and drive as a team, partnered with Landstar. LaBree’s trucking career has seen her behind the wheel for 1.4 million safe miles, and she has received multiple awards from Landstar.

She also serves on the WIT Board of Directors and is a member of the WIT Image Team. She’s an administrator of the organization’s Facebook page and has represented the group and the industry in the press, on the radio and in an appearance on NBC’s “Today” show.

Like many professional drivers, LaBree’s working years started in another field.

And, like so many drivers, there came a time when a career change was the right decision.

“My husband was a heavy equipment operator, and when homebuilding collapsed, we started looking for a new career,” she explained. “He asked me what I’d like to do, and I said, ‘I’ve always wanted to drive a truck.’”

Her decision was no surprise to her family.

“When I was a child, I couldn’t wait to drive a car. I wanted to drive anything — motorcycles, go-carts — anything that moved,” she said. “When I saw those beautiful big trucks on the highway, I knew I would drive one someday.”

So, LaBree and her husband decided to give it a try. She enrolled in the CDL program at a community college in Fort Scott, Kansas — and soon learned about the obstacles women face in the male-dominated industry.

“I was the only female student, and the instructors were old-school truckers who assumed that I was only getting a CDL to be a second log book for my husband,” she said. “When I’d ask questions about some subjects, they’d tell me I didn’t need to learn that because my husband would take care of it.”

That didn’t sit well with LaBree, who insisted on learning everything about the job. Her husband Del was already driving and she used his truck to supplement what she learned at school.

“My father told me that if I was going to own a car, I needed to learn how to change a tire, put gas in it, change wiper blades and take care of it,” she explained. She had the same attitude about trucking.

“When I walked away from the testing center with my new CDL, there was no better way to show them that I could do it,” she said.

LaBree counsels new drivers to learn as much as possible.

“I stress to everyone, learn the entire job. You never know when you’ll need those skills,” she said, giving an example of single mothers who earn their living driving a truck.

As a member of WIT’s Image Team, LaBree often has the opportunity to speak to groups of students who are considering careers in trucking. She’s also been interviewed by the New York Times and on Sirius Satellite radio. During Truck Driver Appreciation Week in 2018, she was invited to appear on the “Today” show, where she was interviewed by Megyn Kelly — who had a big surprise in store. Kelly announced that Shell Rotella, a sponsor of the show, had awarded $10,000 to LaBree.

“We were hoping for maybe a free oil change,” LaBree said with a laugh.

As an administrator for WIT’s 10,000 member Facebook group, LaBree has seen a lot of positive posts, as well as some ugliness.

“There’s always a cyber bully or someone to push the limits,” she explained. “Negativity spreads fast.”

To crack down on the abusers, she says, WIT had to get tough with some policy changes.

“We had to have a zero tolerance in some things. There’s no arguing or conflict; our page is like a ‘safe zone,’” she explained.

When she isn’t online or speaking to other truckers, LaBree is content with life on the road.

“I married my best friend,” she said. “We joke that we’ve been married 15 years — and that’s 30 TRUCKING years. Most couples don’t see each other nearly as much.”

The couple shares their home away from home with a few furry friends.

“It’s great. It makes us get out of the seat and go outside to walk them,” LaBree said. “That stretching and exercise helps a lot.”

Among the causes she supports is a woman’s shelter in Missouri, where she has volunteered in the past.

“I love volunteer work. I think it’s very rewarding,” she said, noting that the trucking lifestyle makes it harder to participate. “I miss the hands-on (activity), but we can help financially.”

LaBree also supports the Midwest Dachshund Rescue in Illinois along with other animal groups.

When they’re not on the road, the couple enjoy camping and fishing, or visiting family. LaBree said she likes to read, usually on her iPad, whenever possible.

LaBree has a message for her trucking co-workers during this period of shutdowns and social distancing.

“Thank you,” she said. “I know what we’re all going through. We’re fighting the good fight, during this difficult time. For me, it’s still an honor to do that.”

LaBree also offered praise for the WIT organization. She’s especially grateful for the relationships she has found through the group.

“They have stuck to their mission. Sometimes organizations fall away from their purpose, but WIT has stayed the course,” she said. “I’ve made wonderful friendships through WIT. Their support is so important.”

LaBree has no plans to change her lifestyle any time soon. She plans to keep trucking and giving back to the industry she represents.