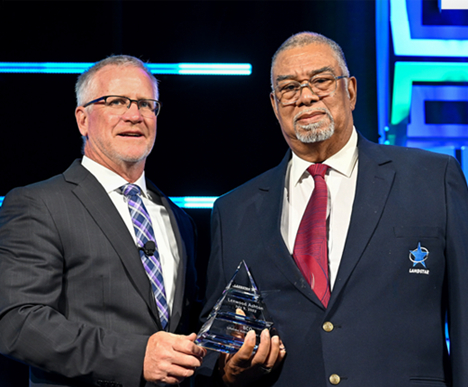 Ashton, who lives in Montross, Virginia, joined the company now known as Landstar Ligon in 1976. He reached his first million miles of safe driving in 1985, and he received his Two Million Mile Safe Driver award and earned the Roadstar recognition in 1996. He was inducted as a Three Million Mile Safe Driver in 2004. In total, Ashton has driven more than 3.9 million miles with Landstar motor carriers without a preventable accident.

Ashton was surprised by the award and moved by the recognition of his career as an owner-operator leased to Landstar, saying, “Of all the owner-operators, they chose me. It means a whole lot. I have loved being a part of Landstar and will be here until I retire.”

During the award presentation, Landstar President and CEO Jim Gattoni commended Ashton for his proficiency, business acumen and dedication to the job.

“The BCO Lifetime Achievement Award is the perfect way to honor more than four decades of safe driving,” said Gattoni. “The award is a testament to Lenwood’s professionalism and excellence as an independent owner-operator leased to Landstar.”

The BCO Lifetime Achievement Award was first introduced during the 2012 BCO All-Star Celebration. To be considered for the honor, nominees must be an active or retired Landstar business capacity owner (BCO), Landstar’s term for independent truck owner-operators leased to a Landstar motor carrier, who has been with Landstar for at least 20 consecutive years. Nominees must be at least a Two Million Mile Safe Driver and also have consistently demonstrated professionalism by developing a positive reputation with regulatory and enforcement personnel, customers, agents and Landstar employees, as well as through industry recognition. The honoree must also be a Landstar Roadstar recipient. The Roadstar designation is one of Landstar’s highest honors for truck owner-operators awarded to the “best of the best” on their high levels of safety, productivity and excellence in customer service.

Of the tens of thousands of owner-operators who have been leased to Landstar during the Company’s history, only 9 BCOs have received this prestigious award. This remarkable group of Landstar BCOs collectively drove over 34 million miles without a preventable accident during decades on the road. It is Landstar’s distinct honor to recognize Ashton with the BCO Lifetime Achievement Award.